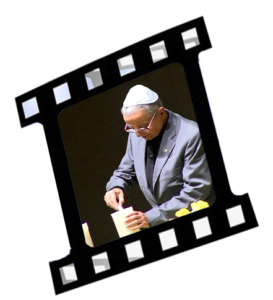 Peter Fischl was a young boy when Hungarian Jews were being rounded up and killed during World War II. Unlike his father, and millions of others, Fischl survived. He lived in the United States for decades, when he saw a picture, in an old edition of Life Magazine, taken of a young boy in the Warsaw Ghetto in 1943.

The boy epitomized fear, as a German soldier stood behind him, rifle at-the-ready. The photograph haunted Fischl, reminding him of what his fate could have been, when he was about the same age as the boy in Poland.

Fischl stayed up all night and wrote a poem, which he called: “To the Little Polish Boy Standing with His Arms Up.” The retired printer had generated millions of pages of words during his career, but this was the first and only time he had been moved to create and distribute his own work. He has used the poem as a personal form of therapy, as well as a vehicle to educate children and adults around the world about the horrors of the Holocaust.

Fischl is seen in a number of Southern California classrooms teaching tolerance to students from dozens of cultures.

In Europe, Fischl visits Budapest, Hungary, where he survived the Holocaust and his father did not. He also journeys to the Auschwitz concentration camp in Southern Poland. Holocaust Soliloquy is a story of one man, one poem and one mission.