The Long Journey from the NFL to Armenia 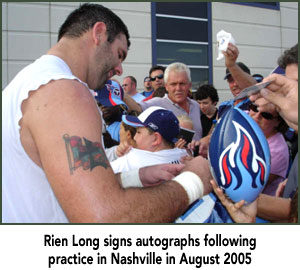 In 2006, Rien Long was a 24-year-old, 6’6″, 300-pound Defensive Lineman in his third season with the Tennessee Titans. He was drafted by the Nashville-based NFL team following a career at Washington State, where he garnered the Outland Trophy, which is awarded annually to the top college-football interior lineman in the country.

In March 2006, three generations from Rien’s family — all born in America — made their first-ever trip to their ancestral homeland of Armenia. Rien was accompanied by his grandmother Gladys, an artist & Rhode Island native, and by his mother Lori Bailey Cunningham, a Los Angeles native and the executive director of the Mandala Project, a non-profit organization devoted to the promotion of peace through art & education. (See Lori’s journal from the trip at: www.mandalaproject.org/Armenia/Armenia1.html)

Krekorian, fled to the United States in the early 1900s, a few years before 1.5 million Armenians where killed by the Turkish Government from 1915 to 1923. Toros was from Kharpert and Elizabeth from Palu, 3,000-year-old Armenian cities occupied and ruled by the Ottoman Empire. Toros and Elizabeth made it to America. Many members of their family did not, perishing in the Armenian Genocide.

Rien Long identifies so strongly with his ancestral roots, he has a tattoo of the seventh letter of the 1,600-year-old Armenian alphabet atop the Armenian flag on his right arm. The letter translates into “beingness” or “God exists.” On his left arm and inner bicep, Long has a tattoo inspired by two centuries-old Armenian churches. His Armenian name “Vartan,” is woven into the churches’ ancient architectural patterns. This son and grandson of artists has expressed his creativity in a very 21st-century fashion.

Co-produced by Peter Musurlian and Dr. Arbi Ohanian, The Long Journey from the NFL to Armenia documents the Vartanian-Krekorian-Long Family’s return to Armenia, some 100 years since Toros and Elizabeth arrived in America.